This year, the pilot bus lanes at 10 bus stops have been pilotly installed, and are introduced in stages.
Stop the bus at the correct point with the IoT sensor and safely get on and off by installing the’screen door’
It is installed from an air purifier and is comfortable from fine dust. Free Wi-Fi, charger, air conditioner, etc.
Consideration for the traffic vulnerable with safety handles and voice guidance… Collect citizen opinions and reflect them in the detailed design 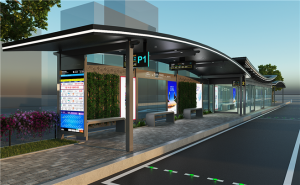 □ Seoul’s bus stops are evolving into a future. With the IoT sensor, the bus stops exactly at the designated location, and a screen door is installed so passengers can safely board without having to move around.

An air purifier is operated on the ceiling, and a vertical garden is planted on the wall to transform it from a fine dust into a comfortable stop.

□ Cooling and heating devices (heated chairs, air curtains, etc.) are also installed to avoid heat waves in summer and cold in winter. Some stops are built indoors, so you can wait for the bus inside.

Seoul Metropolitan Government announced that it would upgrade the bus stop in Seoul to’Smart Shelter’ step by step. It is the world’s first future bus stop with various functions such as cutting-edge ICT technology, renewable energy, and air cleaning facilities.

It was pointed out that the existing bus platform is unprotected from the cold and heat, automobile exhaust and fine dust, and that there is a lack of facilities for the safety and convenience of the citizens using the bus such as the traffic weak. In addition, it was installed with the opening of the central bus lane (July, ’04), and the facility is undergoing deterioration after about 7 years. (*Approximately 15 bus stops at the central lane in Seoul area)

This year, 10 central bus lanes will be piloted at the bus stop and will be expanded all over Seoul from next year. Ten locations confirmed the installation location during this month, and entered the August installation to show the first October. By the end of the year, it will undergo a pilot operation to supplement and stabilize functions.

The city of Seoul started a policy initiative from July of last year to increase the convenience of public transportation for citizens and introduce various services suitable for the times. Beginning in April this year, basic and detailed designs have been started, and various designs are under consideration. The final design will be confirmed through a public design deliberation in Seoul.

Ten pilot installations will be selected from the main arterial roads with central bus lanes, considering their effectiveness.

There have been cases where bus stops specializing in specific functions such as air conditioning and heating have been introduced in some overseas cities, but the city’s first attempt is to comprehensively encompass various functions and services.

In Dubai, for example, an air-conditioned bus stop was introduced in consideration of hot weather. The Boulevard Diderot bus stop in Paris is equipped with heaters for cold, music listening, cell phone charging and internet access.

Singapore installed a smart board for roof recording and information provision, and Curitiba, Brazil, introduced a system and an indoor shelter to collect fees in advance like subways.

Seoul Metropolitan Government expects that the introduction of the’Smart Shelter’ will not only increase the level of public transportation services, but also reduce social costs caused by damage to fine dust, and enhance Seoul’s smart city technology.

Clean air quality: It is equipped with a ceiling air cleaner, indoor and outdoor air quality meters, UV air curtains, and a fine dust information providing system to create a bus stop environment where even basic diseases, children, and the elderly can safely use it.

Eco-friendly Green Energy: Directly produce new and renewable energy by installing a photovoltaic panel, and increase the efficiency of energy use by applying smart LED (illumination and motion recognition sensor).

Citizen safety: CCTV, emergency bell, automatic cardiac defibrillator, etc. are installed to increase the response in an emergency, and safety-handling facilities such as safety handles and voice guidance are also installed.

User convenience (Convenience): The IoT sensor detects the empty space, designates the stop location of the bus to be arrived, and introduces an’automatic stop system’ that guides the driver and waiting passengers, and installs a screen door. When the bus arrives at that point, the screen door automatically opens and closes to match the opening and closing of the bus door.

In addition, it is expected that the convenience of citizens will be increased by installing wireless charging, mobile phone, Wi-Fi, air-conditioning and heating devices, etc., which were most needed by citizens in the time of waiting for the bus.

Seoul City also contains various opinions of citizens in the design of the’Smart Shelter’. Preference voting is held for three types of design proposals, such as a modern reinterpretation of hanok, and a free proposal method is also offered.

The three designs Xi’an is a streamlined green platform-style’Eco Green”Hangulgeul’ that encapsulates the meaning of protecting the citizens of’Korean beauty’, a modern reinterpretation of Hanok’s elegant curves and eaves lines. It is a’Flow’ that symbolizes’d’ and shows simplicity.

“The Smart Shelter is a future bus stop where various areas such as smart city, new and renewable energy, air quality improvement, urban greening, and safe city are converged,” said Hwang Bo-yeon, head of the city transport department of Seoul.