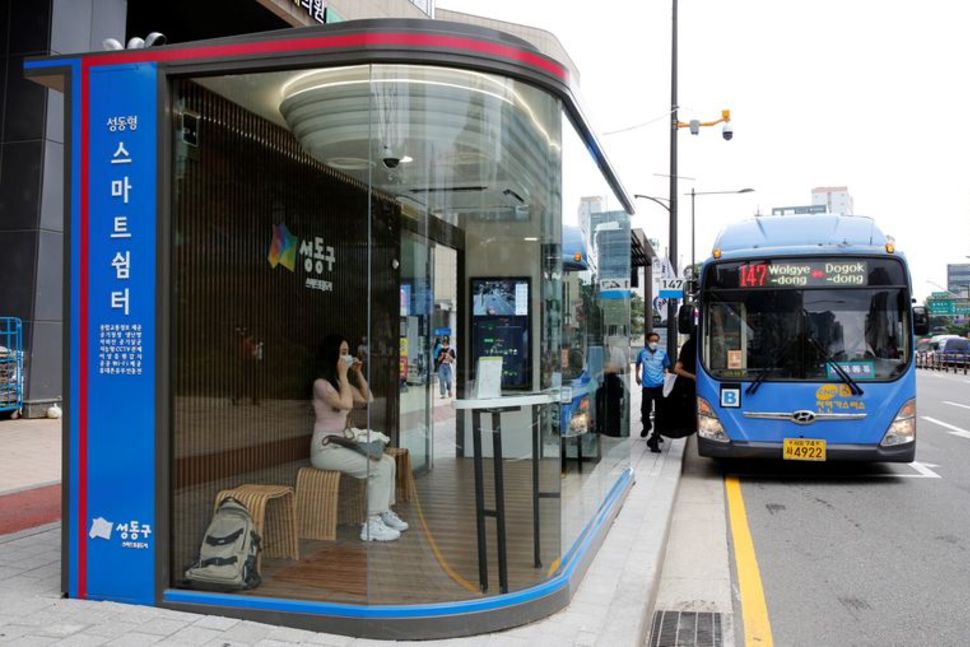 SEOUL (Reuters) – Designed to combat summer heat, monsoon rain and the coronavirus, the smart bus shelter has arrived on the streets of the South Korean capital.

The glass cube “Smart Shelter” has air-conditioning and ultraviolet light sterilisers to clean and cool the air, surveillance cameras and digital screens to warn when your bus approaches. It is equipped with hand sanitiser and you can charge a laptop or mobile phone while using the free Wi-Fi.

“I felt uncomfortable at first as I had to take my temperature before I entered, but it didn’t take that long,” said 25-year-old university student Park Sung-yeon. “I hope we can have more of these so that we can overcome the coronavirus.”

A thermal imaging camera on the doors allows entry only to those with temperatures lower than 37.5 degrees Celsius (99.5 degrees Fahrenheit). A separate camera is installed at a lower height for children.

A solar panel on the roof provides back-up power.

“We also share real-time updates of the situation with police and fire station by using intelligent CCTV, alert bell and AI noise sensor, so that we can respond to an emergency immediately,” said Kim Hwan-gyun, the Seongdong district official in charge of the shelter.

Ten such bus stops have been set up in Seongdong district in eastern Seoul, known for its innovative public facilities such as traffic lights beamed onto pedestrian crossings, and more are planned.

The high-tech innovation, the brainchild of the local district office which collaborated with LG Electronics, was launched earlier this month.

Although South Korea deployed wide testing and tracing to contain the first wave of the coronavirus, Asia’s fourth-largest economy has suffered persistent outbreaks in recent weeks, mostly in the densely populated capital area.